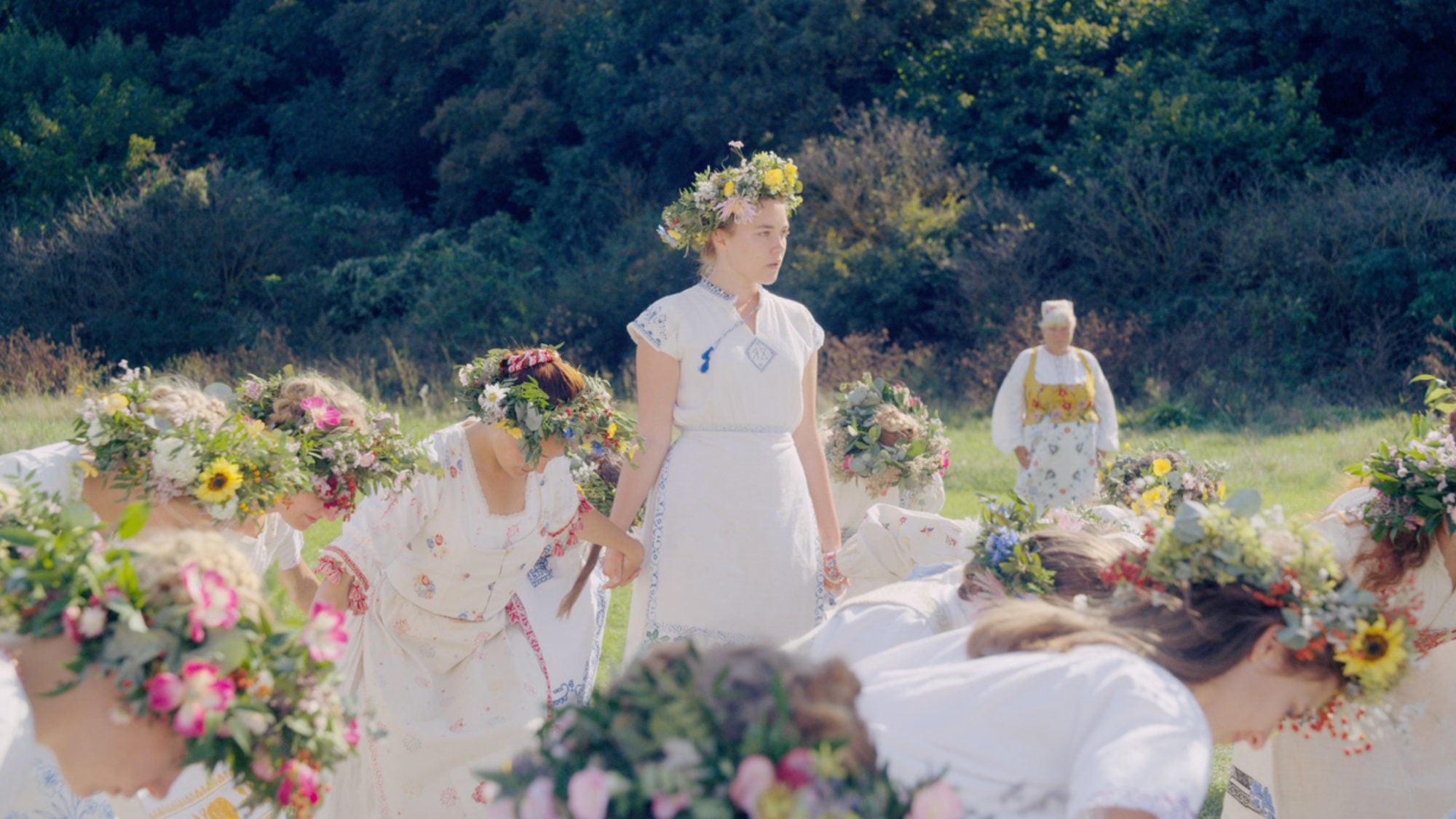 In my private practice I mainly specialize in addiction & trauma, but a sub-specialty of mine is working with former cult members.  I’ve been researching cults for over 20 years, wrote my doctoral dissertation on them, and have helped many recovering cult members.  While cults don’t pose nearly as big a threat to the general population’s mental health as addiction and trauma, my expertise makes it hard to pass up exploring them when they pop up in horror cinema--especially as spectacularly as in Ari Aster’s sophomore film, Midsommar.

There are strong parallels between cults and highly dysfunctional families, and the first 10 minutes of Midsommar focuses on the latter. Dani belongs to a family held captive by her sister Terri’s severe Bipolar Disorder, a disease that leads Terri to commit a murder-suicide with both of their parents via carbon monoxide poisoning. Similarly, the pre-title card image of a wailing Dani being held by her emotionally flat boyfriend Christian could be another such mirroring. Toward the movie’s end Dani finds herself wailing again, this time surrounded by Harga cult members who reflect Dani’s misery back to her. The initial image portrays Dani not getting the emotional connection she seeks, whereas later in the film the cult will reel her in further by finally providing that for her.

While there is no definitive profile of a person who is likely to join a cult, it is easier to get pulled into one during times of significant life changes. Recently losing both parents and her sister, as well as arriving to Harga on her birthday, makes Dani especially susceptible to the group. Cult scholar Dr. Margaret Singer came up with a list of six criteria that almost all cults meet, the first of which is to keep the potential recruit unaware of their intent.  Harga member Pelle enacts this by bringing Dani, Christian, and their friends to Harga under false pretenses. They are never told the true extent to which they will be “participating” in Harga’s Midsommar ritual. Pelle seems to know a vulnerable person when he sees one as he engages in some subtle “love bombing” toward Dani before they all leave for Sweden. Love bombing is used in some cults to influence newcomers through demonstrations of intense attention and/or affection.  As they gather in a friend’s apartment Pelle sits close to Dani, looking in her eyes as he tells her that he’s very glad she’ll be coming to Sweden with them.

Upon arriving outside Harga, Dani & her friends are immediately disoriented by the near-constant sunlight and the psychedelic drugs given to them by cult members. Per Dr. Singer’s list of criteria, cults “systematically create a sense of powerlessness” through this type of disorientation. Once her defenses have been lowered, Dani appears impressed with the big Harga family when arriving at the village as it looks pretty ideal compared in the fallout of her familial tragedy. Pelle engages in a little more love bombing when he gives Dani a hand drawn portrait of herself for her birthday, a stark contrast to the fact that Christian has completely forgotten it. Throughout Harga there are many visual & auditory clues as to the groups’ actual practices & motives.  Like most cults the truth is there if you take the time to investigate.

During the Ättestupa ritual suicides, Dani first witnesses the “empathy cries” of the people of Harga that she will experience personally later.  It is almost as if they are all one being with no individuation, and therefore must feel & exhibit the pain of any one member. Another cult scholar, Dr. Robert Lifton, calls this loss of individuality “doctrine over person.”  After witnessing the suicides, Christian doesn’t go to comfort Dani as she cries but Pelle is right there for her.  Pelle emphasizes that Harga is a family as he holds Dani’s hand, and widens the gap between Dani & Christian by asking her, “Dani, do you feel held by him?  Does he feel like home to you?”

Lifton also wrote about the “dispensing of existence” that goes on in cults, noting that “the group has the prerogative to decide who has the right to exist and who does not.” Harga takes this quite literally as they begin to kill off the visitors for their own ends, either for breaking rules or as ritual sacrifices. They systematically split the entire group apart, breaking the relational bonds between their visitors. Eventually they have Dani dress like them (and take more psychedelics) as a part of the May Queen ritual. This entire ritual is likely an example of something Lifton called “mystical manipulation” whereby a cult creates “experiences that appear spontaneous but in fact were planned and orchestrated by the group.”  This fake competition is likely thrown for Dani to win. After she is totally exhausted from dancing Dani is love bombed by all the Harga members who kiss her, hug her, cry happily, lift her up on a platform, carry her around the village, and ask her, “You are family now, yes?” More manipulation ensues as cult members take the May Queen away to bless the crops & livestock at the same time that they lure Christian into a sex ritual where he mates with a female member.

When Dani returns to see the sex ritual in progress, she is gutted by the betrayal and runs away to sob.  Several women from Harga follow her and mirror her guttural weeping. In doing so Dani’s need for emotional attunement is finally met.  Her sister was the focus in her family, and Christian was never able to empathize with her sufficiently. The women from Harga go with her into the depths of her betrayal, despair, and terror. This is the turning point where Dani is manipulated and attuned enough for her to become a member of Harga, leaving her old life behind. She even consents to the ritual murder of Christian to seal the deal. Like her sister, Dani has decided to cut herself completely free of her old life, taking the last person from it with her and embarking on a new one. Thus the power of this cult and its tactics are proven effective and another life has been absorbed into Harga.