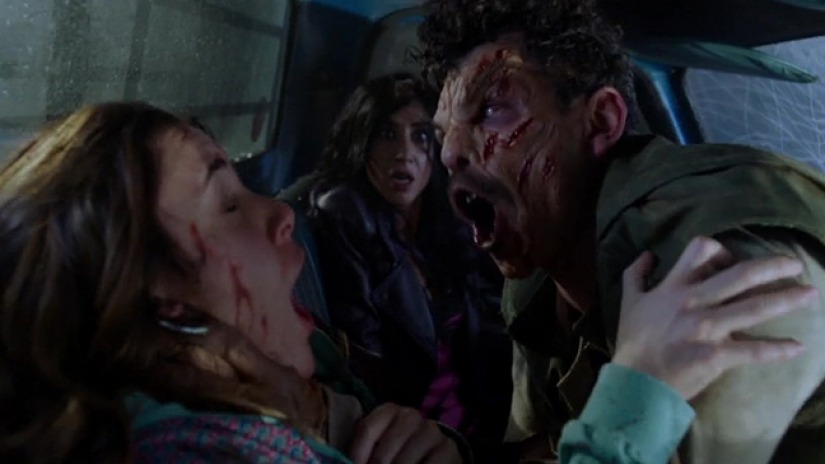 Fatherhood is a trip and so far on this season of Ash vs. Evil Dead our hero is figuring that out one epic misstep at a time. After meeting his newly revealed daughter he promptly kills her best friend and allows her mother to be killed. Then he ends up in the coffin with the mother of his child only to fall out in the middle of the funeral service. It’s a long story.

Needless to say, Ash is not great at this whole being a dad thing, but damn if he isn’t going to keep trying. At the end of the last episode, Ash had discovered that Brandy’s guidance counselor is actually Ruby in disguise. All this occurs shortly before he returns home to find his own dead father shooting the shit with Brandy in the living room. Naturally, he did what any rational paternal figure would do and disembowels the man that Brandy believed was her long-lost grandfather. Color us all surprised when she wasn’t happy with that. When this episode picks up, Ash is bemused and overwhelmed, but luckily his own dad’s ghost is there to help.

The return of Lee Majors as Brock Williams was a welcome to be sure. The interplay between him and Bruce Campbell is always a riot and this episode was no exception. A particular highlight was when Brock asked Ash if he remembered the day he died and the show cuts to flashback to remind us just how devastating and hilarious his demise had been last season. Talking to his own father, Ash got to see a side of him he might not have otherwise been aware of, namely the side that wanted to help his son but didn’t know how. Maybe the two aren’t so different after all. Misguided as they may be, both of them want to protect their family.

If this episode has a weakness it’s that it relies more heavily on CGI than in previous episodes and it stands out. The less than perfect effects are particularly evident in the cellar scene where the show repurposes the infamous tree sequence from The Evil Dead. Whether or not this homage, which fully removes the rape aspect, is done well is a larger conversation than the CGI and bigger than we can get into here, but the poor effects are certainly noticeable.

Ash season three is getting into full gear and with all our characters on various tracks, it’s only a matter of time until they barrel headlong into one another. I can’t wait!