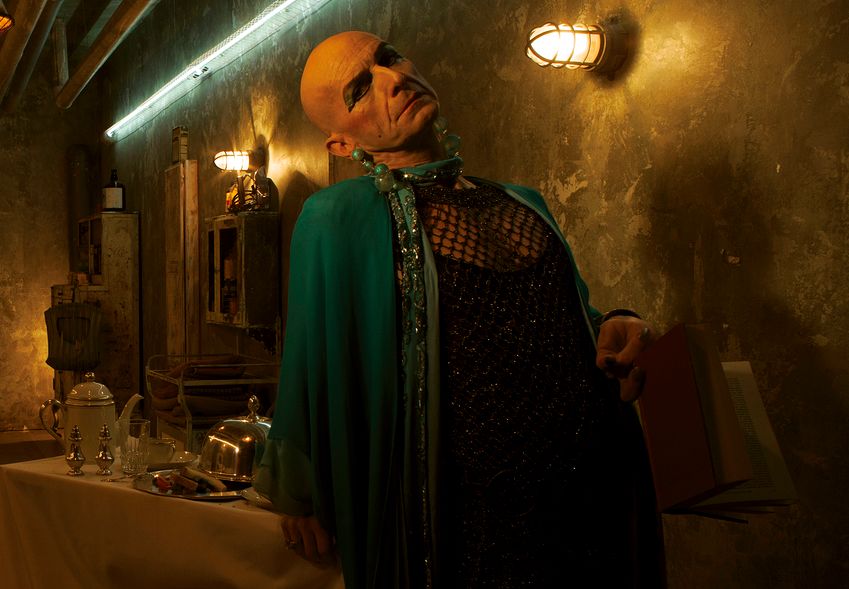 The slow burn of American Horror Story Hotel is starting to catch fire. The fifth episode, “Room Service,” we start to see several things starting to unravel for the worst (but definitely for our entertainment.)

Alex is in the hospital after having drank from the Countess and started her transition. We see Alex tell Max Ellison’s (the child who was sickly before and sent into the hospital) mother to give her some space before signing the DNR. Alex then ends up in the blood bank and starts ravishing through the blood bags, basically bathing in it. She then ends up deciding that in her blood rush hang over, that injecting her own blood into Max.

Outside the hospital and the Hotel, Donovan takes his transitioning mother, Iris to Ramona’s house in the middle of the night. He’s got a new plan to take down the Countess and Iris is their inside man because no one ever notices her.

Eventually returning to the hotel, Iris looks like crap and Liz Taylor puts the pieces together after questioning her. After a bit of a pity party and a mixed drink of blood, Iris is starting to feel better but realizes she’s going to have to make some changes in her new life.

We flash back over to what creepy child Max is doing, and surprise! He’s killed his parents and drank their blood for breakfast before heading off to school.  When he gets to school, they are having a costume party (after Halloween which is weird, but whatever it’s about to get even more weird) and his schoolyard girlfriend tells him she’s glad he’s back and they end up sneaking into a dark closet together. Its super awkward because these children are being touchy feeling and kissy but Max kisses her and bites her (which wtf Murphy – this is uncomfortable to watch) and even better, he tells her to drink some of his blood which she does! Basically after this, all hell (like literal Hell) breaks out in the classroom – Max slits the teachers throat, his girlfriend feeds on her, and everyone else starts turning into these blood lusty demons who take over the entire school. School goes into lock down and the SWAT team swoops into save them, while the children come up with some crap story about a masked man.

Back at the hotel some super obnoxious hipsters show up and start demanding ridiculous things from weepy Iris. The Countess also heads out with her arm candy Tristan – both who stop at the front desk and tell Iris that she “smells weird.” Guess Donovan’s plan isn’t as fool proof as he thought – and Countess isn’t as good as a vampire as she would have you believe.

We also get the back-story of Liz Taylor in this episode, where she tells us she was a married man from Kansas who got married only because his wife was the same dress size. While on a business trip with some coworkers, Liz Taylor stays in her hotel room and plays dress up instead of going to the strip club. After ordering room service, Liz opens the door to the Countess who tells her that her blood smells like a woman despite being a man. After the Countess comforts Liz and empowers her by saying that she “doesn’t lack beauty, just commitment” and renames her Liz Taylor. Basically Liz becomes the Countess’ dress up doll and little bird, as Liz is on a practice walk to the ice machine she is hounded by her coworkers – until the Countess shows up and slices their throats.

Liz and Iris share a bonding moment and Liz tells Iris that she should make the bratty hipsters pay for being aholes. We all get a little excited at this moment, thinking that Iris is gonna channel her real life being Kathy Bates and go all Misery on these kids – but she only stabs them both and drinks their blood. (Which as a side bar is super weird that everyone else starts to turn into the best version of themselves while poor old Iris still has her weird dated haircut and pitiful complexion.)

Lastly, we see Lowe and Sally in bed after having sex and he gets freaked out and tells her to leave. She gets weepy and tells him their destiny is to just have sex forever. Iris and Liz throw the hipsters’ bodies down a secret shoot and drink their leftover wine. Alex and Holden go to sleep in some double wide glass coffin after the Countess tell her she is the children’s new governess-which probably isn’t going to work out so well when it’s found out she created a child army of blood suckers.

Be sure to live tweet with me next Wednesday night at 10pm using #TweetWithBGH and @cc_riots!