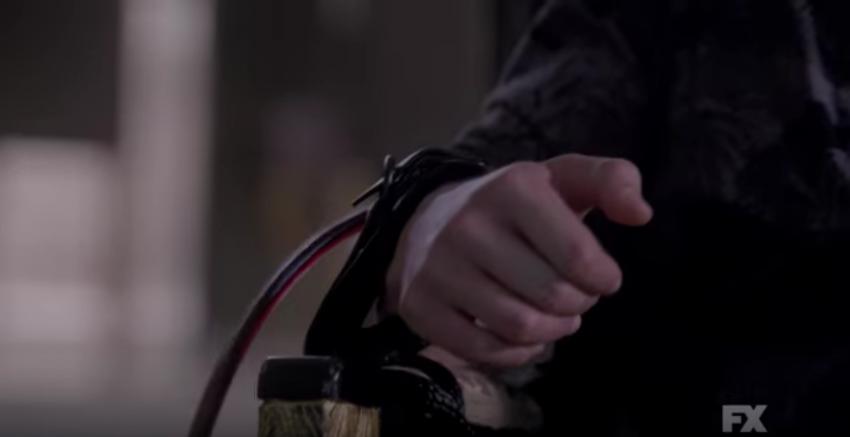 If the first two episodes of AHS: Hotel were lacking in back story or motivation for the main characters, episode three should have started to quench your thirst.

The beginning of Episode 3, “Mommy,” opens with a cheeky conjuring of Mr. March by Tristan – who has told him he’s ‘googled’ him and knows everything about his life and is feeling particularly inspired by his work. Realizing the floor that Mr. March inhabits is slated to be demoed – Tristan tells him he will take care of it. Taking care of it means murdering Will Drake and as Tristan is trying (rather successfully) to seduce him into a submissive position to slitting his throat – The Countess arrives and stops him. Tristan later learns that The Countess was once very wealthy and basically threw all of her money at Bernie Madoff – who in turn lost hers. Now to reacquire wealth, she wants to marry Will Drake and then murder him.

We also get a flash back of Alex and Det. Lowe’s former life, focusing on Alex and her troubled childhood that lead her to want to help children. When she winds up pregnant, she realizes that she loves their son Holden more than anyone else (including John and her daughter Scarlett.) Flash forward to the broken family in therapy discussing Scarlett’s story of seeing her missing brother in the hotel and Alex becoming increasingly agitated and distressed.

Lowe gets distracted by another 10 Commandments murder- this time at a gossip rag magazine office. When Lowe returns to Hotel Cortez, he literally runs into Gabriel, who has just emerged from Claudia, (Naomi Campbell) Will Drake’s assistant’s, bed and stabs her to death. Again returning to Hotel Cortez Lowe seeks out Sally who had imprisoned Gabriel and she seduces him and escapes him in the elevator, while the creepy drill bit demon lingers behind them.

Alex shows up uninvited at the hotel and serves John divorce papers in turn he becomes hysterical and she has to help him back to his room. As they share a tender moment that looks like it is going to turn into some weird goodbye sex, Alex is offended when John suggests they have another baby. As she expects to leave, Alex gets turned around in the hallways and finally for herself sees her son at the end of a corridor.

The most intriguing parts of episode three revolves around pouty and sulking, baby boy Donovan and his unexplained hatred for his mother. As they have a rather nasty exchange and he tells her to kill herself, he runs off into the night to feed off of some drug addicts. Unfortunately for him, but excitedly for viewers, he sees Ramona (Angela Bassett) on the street looking as if she is in need of help. Thinking he will feed off her, Donovan moves to attack her, but in turn is attacked himself. When he wakes up, he is attached to a blood draining contraption in a lush post modern Hollywood Hills mansion. Ramona explains to him that she needs an insider to The Countess as they were once lovers, until Ramona fell for a rapper and The Countess feeling scorned, murdered him in front of her. When Donovan explains he was dumped – Ramona, annoyed, frees him.

When he arrives back at Cortez, Donovan gets a verbal tongue lashing from Liz Taylor at the bar about being a jerk to his mother and rushes to her room to apologize. He arrives just as Sally is successfully helping Iris suffocate herself with drugs and a plastic bag. In a fit of guilt and Norman Bates love/hate fueled effort, drips some of his virus blood into her mouth to save her.

Seems like The Countess is making more enemies than lovers and the tables are turning in Hotel Cortez.

Be sure to live tweet with me (@cc_riots) next Wednesday night at 10pm – and use the hashtag #TweetwithBGH !