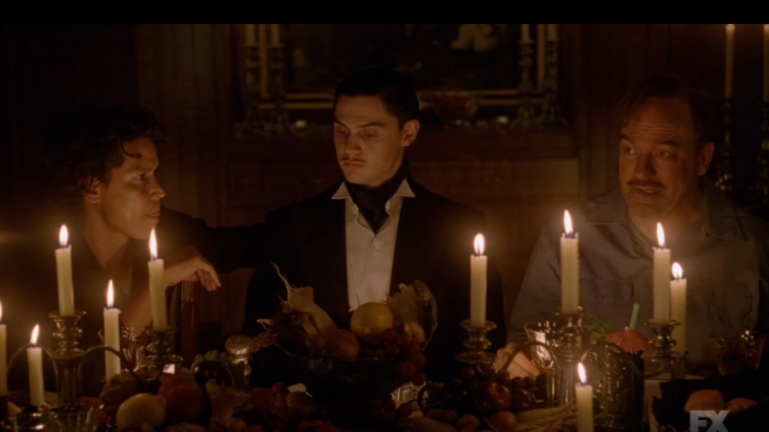 The Halloween episode of American Horror Story: Hotel was aptly named “Devil’s Night,” though it did little to really deliver on the horror of such a foreboding title.

We do get to see a little more of a backstory from Ms. Evers and how similar it is to Det. Lowe’s own story. Back in 1925, her son was taken while they were out trick or treating and she was not paying attention. It’s later discovered that her son was killed during the reign of the Wineville Chicken Coop Muders and nothing of his was left behind, save a bloody sheet. Now her obsessive cleaning makes a bit more sense.

Understandably confused by the timeline of Ms. Evers – Det. Lowe starts drinking at the hotel bar and starts flirting with someone he assumes is dressed as Eileen Wuornos for Halloween. After a bit of a tussle in Det. Lowe’s hotel room, Eileen tells him that Mr. March takes care of his “special guests” and he can’t arrest her.

We as the viewers are introduced to some interesting and entertaining cameos as Devil’s Night seems to revolve around the standing invitation of Mr. March to his ‘protégés’ – whom all happen to be some of the most notorious serial killers in history. We find out at some point in time, the Richard Ramirez, The Night Stalker, (who is also infamously described as physically disgusting as a person is played by an attractive actor) Eileen Wuornos (played by Lily Rabe, who does an amazing job), John Gacy, Jeffrey Dahmer and even the Zodiac Killer (who everyone ribs for wearing a mask and coming up with his own nickname) have all spent some time at Hotel Cortez. Apparently, Mr. March saw their potential and helped each individual realize their abilities. Which when considering the guests are all killers – it’s a bit strange that Detective Lowe has been invited and that Mr. March seems so interested in “helping” him.

While this dinner party from Hell is happening, Alex has been dealing with the repercussions of finding her son in the hotel and taking him back home without telling anyone. After finding him dining on the family dog, Alex rushes back to Cortez to figure out what could be happening to him. Upon finding the Countess, Alex agrees to work for her (which is not really discussed what exactly that means) if she will turn her into a vampire so that she can forever be with her son.

Besides the fun of watching serial killers bicker among themselves at the dinner party, there isn’t a whole lot more happening. Ultimately, it was a somewhat disappointing episode, given that in past seasons something crazy usually happened on Halloween.

Check in on Wednesdays as I live tweet @cc_riots using #TweetwithBGH at 10pm!