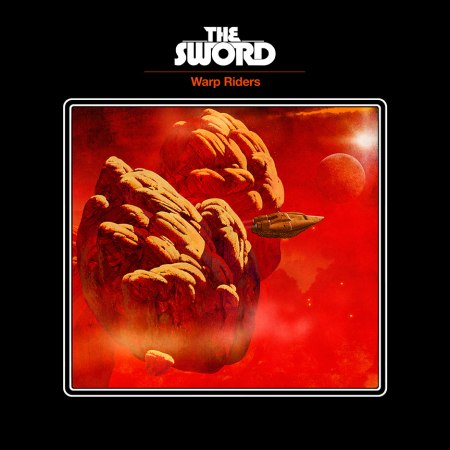 Albums like this are why I take so much joy in listening to music. It makes sifting through all the boring, blasé, baseless music seem trivial in the face of unearthing such beaming majesty as this.

Simply stated, and cutting to the chase, “Warp Riders” from The Sword, a band that is sure to be in the ranks of metal aristocracy soon, is my runaway favorite for Album of the Year.

The entire experience, from the cover art to the layout, the fonts to the liner notes, is packaged to give the impression of a late-seventies blues-ripped revival. The Sword not only delivers on that promise, but aspires to be something more, and achieves a level of unitary metal accomplishment that is too rare among post-grunge era metal.

The overall message is that the big riff isn’t dead. “Warp Riders” proves that in no uncertain terms, as each song contains a spine-rocking, sharp-toothed, deep-grooved throw down that you wake up humming days later. The riffs are so powerful, so peerless in execution that it makes you wonder what The Sword knows that no other band seems to. It’s almost as if the band set down to record their grand, new concept album and said “How best can we pay tribute to Black Sabbath, Deep Purple and Cream?” So they studied the albums that have come before, kept their signature ‘forty miles of bad road’ distortion turned up, and cranked out one of the most authoritative albums of any band since the turn of the millennium.

In an ironic but clever twist, The Sword kept the gears churning in such convincing metal fashion by not trying to push the envelope and force the metal issue. There are plenty of riffs, like the bridge from “The Chronomancer I: Hubris” or “Lawless Lands” that are much more down-home blues rock than metal, but with the emphasis on beat and drive, and with the distortion rippling through each note, it ends up being some of the best metal of all.

The production is nearly beyond reproach. Matt Bayles struck a perfect balance between depth and noise, resulting in a product that resonates in your speakers without blasting them out. “Warp Riders” is extremely comfortable at loud volumes and delivers a satisfying punch without unnecessary rattling of cages. The harmony between the instruments is sublime; Bryan Richie on bass with Kyle Shutt and John Cronise switching off rhythm and lead guitar duties are so in sync that the albums requires multiple listens to detect all the intricacies. The rhythm lines with the bass make for the backbone of “Warp Riders,” but when the lead guitar lines come dancing over that backbone, the results are so well balanced as to be sublime. “Tres Brujas” has both a rafter-shaking, impeccable riff and a magnificent lead line that flits in and out and is an excellent compliment. That song and others are slightly akin to the kind of infectiousness that Norman Greenbaum’s “Spirit in the Sky” had to offer, but hooked up to a nitrous tank and some serious steroids.

For all the aping of Deep Purple’s “Machine Head,” and Black Sabbath’s “Master of Reality,” The Sword also twist a modern edge into the mix, making the sound both a tribute and something that is uniquely theirs; “Astraea’s Dream” starts the second act with some heavy machine-gunning, almost single-handedly demonstrating the evolution of heavy metal through the decades from then to now.

“Night City” is probably the album’s poppiest cut, and hails like an old Thin Lizzy single with more muscle. Coincidentally, it’s the album’s weakest offering, though the initial guitar intro is impressive.

That gets backed up by “The Chronomancer II: Nemesis,” which brings us right back to the Sabbath-ian power riffs that run like electric current through all of “Warp Riders.” Each song offers at least a piece of a wonderful puzzle. It’s the type of album that’s overwhelming; it gives you a bodily reaction. Your spine tingles, your head snaps around to listen, your ears perk up. The hooks are impossibly catchy, the timing perfect. Before you know it, your head is rocking on its neck, your foot is slamming out the beat, your whole body is lost in the album’s musical fury.

I could go on much longer, but I would run out of superlatives. “Warp Riders” is a masterpiece. Take some time and enjoy the best American metal band working today.