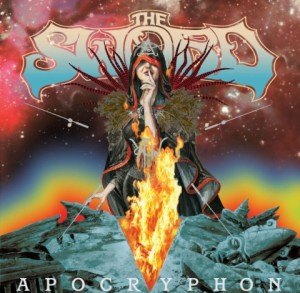 It seems almost impossible to think about The Sword’s “Apocryphon” without also thinking of their mammoth concept album “Warp Riders.” That record was nothing short of a modern masterpiece, masterfully blending blues-soaked doom riffs with the fiery grit of heavy metal, the end result a symphony of might and magic and science fiction. Fair or not, “Apocryphon” will be judged against “Warp Riders,” as the latter album was the exclamation point on The Sword’s rise through the ranks of metal.

“Apocryphon” is a patient album, which isn’t normally a term associated with modern metal releases. The album is a dense construction of riffs and cadences and bones and steel and ideas, but rather than launch a fusillade of those elements at the listener, The Sword waits for the listener to come forward and unravel the mysterious layers for him or herself. Each cut waits with Excalibur-ian resolve, awaiting the proper hands to grasp the hilt.

Where “Apocryphon” departs from its predecessors is that it lacks the expected elements of crunchy speed metal. Never does the album drop down into a punchy gallop riff, nor does The Sword ever turn on the band saw. All the riffs, while painstakingly and meticulously crafted so that each note tells its own story, fail to press the pedal to the floor and increase the tempo appreciably. That is except for the title track, a detuned blitz that really works despite utilizing more campy Jon Lord keyboards that it has any right to.

What makes this more curious is that, when viewed through a macro lens, the ability and willingness to change gears is part of hat separates The Sword from stock-in-trade doom or stoner metal bands. The absence of that feature is conspicuous and can be off-putting, particularly upon hearing the record for the first time.

The Sword are a band possessed of many tricks however, and they open their full toolbox for “Apocryphon.” Many of the album’s best moments are deceptively catchy, causing your body to react before your mind does. Catch the sneaky rhythm riff of “The Hidden Masters” to hear an active undulation that speaks to the kind of throwback traditional doom that The Sword has always stood for.

If The Sword doesn’t assault the listener with speed and agility, they turn the page by instead coming with sheer force. The back half of this record is positively littered with powerful riffs that envelop the ear and couch it in aural information. Guitarist Kyle Shutt was heard to say before release that the album sounded “big” and it certainly does. Each moment feels like the step of a giant, particularly in tracks like “Cloak of Feathers” and “Eyes of the Storm Witch.” In truth, this same descriptor could be used for just about any track on the album, as each one focuses on a different facet of the word “heavy.” Eschewing pure speed solos for a more artistic approach, The Sword creates cavernous riffs and only once or twice tiptoes the line of ‘too much.’ Not really since their debut “Age of Winters” have we seen the band concentrate solely on delivering a weighty experience, and “Apocryphon” takes that formula and combines it with the lessons in arrangement and composition that they’ve learned along the way.

Is “Apocryphon” superior to “Warp Riders?” No, it isn’t. It’s probably not even equal. But that’s like saying that “Dirty Deeds Done Dirt Cheap” isn’t as good as “Highway to Hell,” or “Sinister Urge” isn’t as good as “Hellbilly Deluxe,” or “Sgt. Peppers” isn’t as good as the White Album. We’re splitting hairs between two monsters of the genre by a reigning champion.

The interesting question with The Sword going forward is what will they do next? Producing a second effort of this nature will cast the band’s image, and may alienate some fans who prefer The Sword’s speedier elements, as well as gain some who prefer the doom-ier parts. In actuality, it is the next record that will ultimately define “Apocryphon” either as an experiment or a transition.

“Apocryphon” shows the opposite side of The Sword than “Gods of the Earth” did, and it is both better and not as good for the effort. The bottom line here is that The Sword is one of the fundamental guardians of contemporary American metal, and “Apocryphon” is another really good record that proves that point.