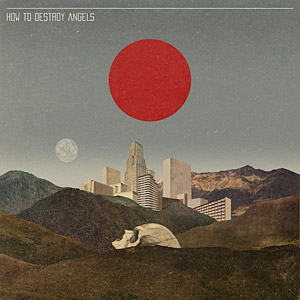 Album Review: "How to Destroy Angels"

Reader beware, I'm wading lightly into dangerous musical territory for me. Trent Reznor's new EP with his brand new bride (who is reportedly expecting,) entitled "How To Destroy Angels" is a foray into the depths of modern electronic music. I am a stranger in a strange land for this, but I shall endeavor to open my mind and do my best.

"The Space in Between" kicks off and is instantly recognizable as Trent at his electronic egotistical best. It's airy, ambient, but with a dire insistence as though the song was part of a soundtrack from some gritty, dimly lit science fiction movie. It wends its way through images of dark corridors and secrets meant not to be revealed.

Following that, "Parasite" continues on the same trend, vaguely reminiscent of a montage of some terrible colossus being built beneath the earth. It has a feeling of some unspeakable, unstoppable army on the march. Discord runs rampant toward the end of the song, with screaming electronic distortion layered over the punishing, non-stop beat.

Past there, the six-track EP takes a directional turn, dropping a lot of the feeling of ambient doom, and instead giving way to what might be called a more traditional, old-school approach to electronica. It's bouncy and driven by a percussive beat more similar to a sharp snare drum. “Fur-Lined” sounds like an angry beehive and “BBB” features more warlike vocal chanting.

"Believers" is ultimately dry and sparse, but "A Drowning" is a nice finisher. It builds slowly from almost nothing, and floats easily into a crescendo with multiple harmonies and instruments. Almost just as quickly as it arrives, the piece is stripped back down like a wave receding into the sea, leaving very little trace of what happened just moments prior.

"How To Destroy Angels," if it were to be compared to Nine Inch Nails pieces, is much closer to "Ghosts" than it is "The Downward Spiral." If that's up your alley, give it a shot. After all, it's a free download on their website, so you have very little to lose.