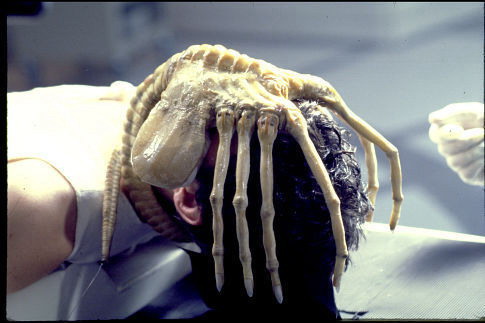 Let's all freak out, "Prometheus" opens today. The excitement is palpable (even with mixed reviews coming in) and I personally can't wait to get thrown out of an airlock once more by Ridley Scott. There's a lot to be excited for with the film: a new entry in the Alien franchise, the release of a big budget sci-fi horror film, and more Michael Fassbender in our lives. Though its the sci-fi horror angle that will always get me, particularly with a setting in space and outer worlds. So this week I'm running down 9 Scary Space Movies in preparation of the big debut. As long as it's not set on earth (mostly) it's fair game.

Director: John Carpenter
Cast: Natasha Henstridge, Ice Cube, Jaosn Statham, Clea DuVall
Why so scary: Not all that scary as a film, but in theory its horrifying. Martian ghosts from an ancient civilization possess the bodies of a prison detail assigned to transport a dangerous criminal. Could've been something much more terrifying and interesting had John Carpenter done this in the '80s post "The Thing".

Director: Antony Hoffman
Cast: Val Kilmer, Carrie-Anne Moss, Tom Sizemore, Simon Baker, Benjamin Bratt
Why so scary: Primarily on this list for a sequence between Simon Baker and Benjamin Bratt in which Baker throws Bratt off a cliff into a gorge just minutes before learning of their ability to breathe in the newly terraformed Martian atmosphere. Though the finale of Val Kilmer flying through space with zero oxygen relying on Carrie Ann Moss for survival should be exhilarating and scary, the films failures as a narrative deprive the scene of suspense and drama.

Director: Duncan Jones
Cast: Sam Rockwell, Kevin Spacey
Why so scary: Existentialism officially becomes a theme of this list with the addition of "Moon". Not to include spoilers, but individuality and perceived personal importance are the root of this excellent drama set on the titular orbiting sphere. Tonally dark with a hopeful yet simultaneously depressing finale, not for the emotionally weak.

Director: Christian Alvart
Cast: Dennis Quaid, Ben Foster, Cam Gigandet, Antje Traue
Why so scary: The first true sci-fi horror picture on the list has many elements to incite terror. Beginning with the ravenous super zombies frolicking around freely aboard the ship. Once you've gotten past those, how about dealing with the fact your all that's left of humanity and Earth is gone. Still not enough? Ok then throw in a sequence of genocide by evacuating cryo-sleep chambers into space to be lost forever in that black abyss of emptiness. Thought that might get you.

Director: Danny Boyle
Cast: Cillian Murphy, Chris Evans, Rose Byrne
Why so scary: While not as viscerally and intimately frightening as some others on the list, despite the third act murderous twist, "Sunshine" makes up for it by the added tension of saving the human race from a dying sun. Combining the filmmaking techniques, storytelling, surprise twist, and intensity of the narrative makes "Sunshine" an incredibly interesting piece to digest.

Director: David Twohy
Cast: Vin Diesel, Radha Mitchell, Cole Hauser, Keith David
Why so scary: Stranded on a desert planet with an escaped mass murderer who also happens to be your best chance for survival. Add in revelations that your trusted female leader tried to jettison the entire crew, the small twist that a year long eclipse is setting in, and that vicious, man-eating, flying monsters have come out to feast on the new available food source: the crew. This film has a lot to process even as it parades as a by the numbers action thriller initially.

Director: Paul W.S. Anderson
Cast: Laurence Fishburne, Sam Neil, Kathleen Quinlan, Joely Richardson
Why so scary: The titular ship that is being investigated by the unsuspecting crew has just returned from a lovely 7 year stay in Hell. Literally a black hole transports the ship into the other-dimensional Hell. Sort of easy to understand why it would be slightly unnerving to an unsuspecting investigation team.

Director: Stanley Kubrick
Cast: Keir Dullea, Gary Lockwood, Douglas Rain
Why so scary: Getting major points for being first, the most quality film, and sheer scope on the concept, this film is downright terrifying after the musical stops. Heading out to meet monolith 3 when your sentient super computer shoots your shipmate into the void of space, all while discovering mankind's origins and facing seemingly certain doom.

Director: Ridley Scott
Cast: Tom Skerritt, Sigourney Weaver, Ian Holm, John Hurt
Why so scary: The tall and menacing xenomorph lurking in the innards of the dark and ominous mining vessel Nostromo. That's all that's needed. Though including the nefarious intentions of the crew's employers and resident android also provide a rather terrifying secondary villain as well. I highly doubt "Alien" will ever be removed from its perch atop this list.