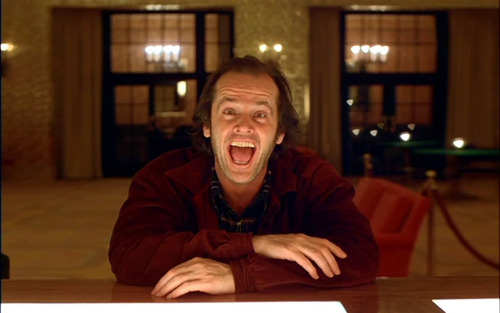 Happy Father's Day weekend everyone! It's that time of year where you buy your dad an ugly tie, socks, or just a new flask so he can cope with being a parent a little while longer. The horror genre also has dads all throughout its film lore. Ranging from virus spreading buffoons, to simple child murderers. Real stand up gentlemen these patriarchs. SPOILERS abound, but here are 9 Horrible Horror Dads.

The Father Figure: David Drayton played by Thomas Jane
Daddy Issues: David really gives it a great effort in this movie. He fends off a mob of religious zealots from sacrificing his son. Begins the groundwork with Laurie from "The Walking Dead" to be the boys new mom. Even escapes death constantly in spite of insurmountable odds. I almost feel bad about including him with the rest of these wretches and dead beats. But then there's the small fact that he shoots his son IN THE FACE. No doubt he had good intentions, hoping to save his child from a worse fate amongst the monstrous bug creatures. Though it hurts his case once you realize backup was mere moments away from arriving. Bad parenting, or bad timing?

The Father Figure: Daddy played by John Brumpton
Daddy Issues: A hardworking, blue collar father that provides as much as he can for his lonely daughter. Sacrificing his own well being and happiness on her behalf. Sounds great right? Did I forget to mention his psychopathic tendencies that leach onto his daughter. And also being an accomplice in multiple abductions and mutilations. He may not be a great role model, but dammit he's a committed parent.

The Father Figure: Jay played by Neil Maskell
Daddy Issues: A full blown example of PTSD going wrong by continued trauma, Jay experiences some pretty heavy hitting stuff throughout his journey to eventual filicide. He's just your average hit man trying to make some cash and get out of the game. Too bad a crazy nudist colony has other plans for Jay and his family. The tortuous ordeal leads to Jay's eventual shish-kebob of a "hunchback" that happened to be his only son.

The Father Figure: Clive Nicoli played by Adrien Brody
Daddy Issues: Two lovers and genetic engineers work to create a new life form from different genes of animals. The result is Dren, a hyper evolving human hybrid who must be cared for as a parent in many ways. Until Clive gets seduced by her hybrid naughty bits and mates with the inhuman. Caught in the act he is shamed, but the damage is done. Daddy receives his comeuppance once Dren spontaneously changes sex and penetrates him...through the heart, with a tail stinger.

The Father Figure: Mitchell Toblat aka Beast played by Richard Tyson
Daddy Issues: A step-father who oozes with a slime ball persona, but also eviscerates the young adult life of his step-son Derek. When in human form he's repulsive: sleeping with and marrying a murdered friends wife, and semi-forcing his stepson's kinda-girlfriend to orally pleasure him. As a werewolf he's just your average father and uncle murdering, friend killing and raping, one liner spewing lycanthrope. All standard stuff that a stepson will understand after years of therapy.

The Father Figure: George Lutz played by James Brolin
Daddy Issues: Location, location, location. The first rule of real estate couldn't be more true also for George Lutz's relationship with his family. By buying a possessed house on the cheap, he also takes on the responsibility of going crazy and attempting to axe murder his kin. A poor business man too, the family leave the property and possessions behind setting them even further back in a bad housing market.

The Father Figure: Don played by Robert Carlyle
Daddy Issues: Children safe and sound, Don and Alice are surviving in England amongst the hordes of rage infected monsters. Until Don runs out on Alice to save his own life in fear desperation, and cowardice. Lies to his children upon his return to safety. Then confronted with his wife alive and back in England, becomes infected, kills his wife and reignites the pandemic by becoming a brand new patient zero. Not only is he a terrible father, he's the rebirth of the apocalypse!

The Father Figure: Jack Torrance played by Jack Nicholson
Daddy Issues: First easy to notice problem, the man procreated with Shelley Duvall. That's messed up. After that he takes his already mixed up son for a fun vacation as caretakers of a massive hotel frozen over and isolated from the rest of the world. Eventually all the crazy comes out and Jack's flirting with ghosts, killing kindly black men, and hacking through doors with an axe. Finally chasing his son Danny through a hedge maze only to be the perfect of example of a quitter to his son by stopping and freezing to death. At least show you're son how not to give up Jack.

The Father Figure: Guy Woodhouse played by John Cassevetes
Actual Father: Satan played by Clay Tanner
Daddy Issues: So your mother is a kind hearted blonde that has been auctioned to Satan by your success hungry stepfather looking for a break. As a kid that doesn't seem like the most wonderful way to start out your existence. Excluding the fact that the child is the Antichrist of course. Being born out of devil-rape isn't all that bad when looked at through a different spectrum I guess.