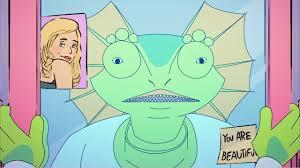 This last November members of Team BGH had the opportunity to check out some of the short and feature films from the Atlanta-based Buried Alive Film Festival. Jayson takes us through a few shorts screened during the festival’s 11th consecutive year.

Written and Directed by Anca Vlasan

This is a weird little animated short that details what happens when a lizard-woman uses a tinder knock off to find a date and is forced to go through all the beautifying hoops of social acceptability. Its bizarre animation and the strange off kilter grotesqueness of something that would be shown on Liquid Television in the early 90s is all handled with a half-smug wink and a nod. One that says yes, this is fucking weird but, so is all the bullshit woman actually go through to meet some schlub at an overpriced Italian joint for what likely amounts to a one night stand. I look forward to more weirdness from Anca Vlasan in the future.

Written and Directed by Brian Shephard

Of the three shorts I had the pleasure of seeing this year this is the weakest. Not because it is without atmosphere or the acting is atrocious. Both are fine. Instead this simply feels like a showcase for some modest CG monster effects without a ton of time spent developing a story, character, or any kind of mythos that might make this worth seeing.

Terror Road is your typical young lady gets stopped on a spooky road and attacked by a monster story. Maybe those involved will go on to do interesting things in visual effects in the future, but they will need to spend significant time developing their imagination and creativity if they want to produce something unique.

Tote Tiere translates in Swedish-German to “Dead Animals.” This foreign language short delivers on that premise very quickly. There are shots of a dead baby calf and bucket loads of dead chickens immediately. So, if that is the sort of thing that makes you squeamish probably best to avoid this one.

However, past the initial grotesquery, Tote Tiere focuses on the grieving process of a man who has lost his cat and is seeking a way to honor, let go, and feel connected to his lost friend. As such this a short that tries to reconcile both the absurdity and grief of loss. There is probably something interesting to mine from this premise, but the final turn which we are to find slightly humorous (and perhaps endearing) undermines the earned earnestness and humanity of the earlier moments. That being said, there is enough here to make me look forward to more work from David Oesch and Remo Rickenbacher with a fully polished premise.