Eliza Dushku starring film "Open Graves" premieres on the Syfy channel on September 19th. I have no idea what it's about but every production still has her in a bikini. I'm onto your game, Syfy.

Rob Zombie has just locked his edit of "Halloween 2", and is sending it off for all the usual post processing jazz. Oh, and he posted a picture of Michael Myers giving us the finger... he's so wild and edgy, that guy.

I suppose this is accurate considering the source... but Variety reports that Sam Raimi will be directing "Warcraft", the big budget adaptation of the popular MMO World of Warcraft. Whoa.

The effects guys behind the "Nightmare on Elm St." remake describe Freddy's look as more of a recovered burn victim. They also talk in this report about Jackie Earle Haley having a smaller nose than Robert Englund, and how that played into the makeup. Pretty decent read if you're interested.

The release date for the "Hellraiser" remake has been changed from 2009 to "To Be Announced". According to Box Office Mojo, the official title is "Clive Barker Presents: Hellraiser". At least I like the title. Now we'll just have to wait and see how the movie turns out.

The people behind "Sorority Row" listened to me and went with the poster that has all of their actresses laying all over each other. It makes studios happy because it vaguely resembles those cheesy "floating head" posters, and it makes me happy because it's sexy. See, everybody wins.

"Predators" will be "Aliens" only with "Predators". Got it? To expound, the sequel will follow a group of people stranded on a Predator planet who have to deal with the "horrors they encounter".

Rob Zombie's "Halloween 2" is a little less than a month away folks. Up on Zombie's blog today is a still of Sheri Moon Zombie with the new boyhood Michael Myers, Chase Wright Vanek. I haven't been paying that close attention but I believe this is really the first time we've seen this new Myers in an official still... so, there it is.

Luke Goss of "Hellboy II" fame has signed on for a cameo role in the second season of "Fringe".

New stills for "The Final Destination". See that last one there in the theater... how meta! It's like you were murdered in your seat while you were watching the movie in 3D. Get it?

Until Rob Zombie changes his mind, this is the official one-sheet for "Halloween 2". I actually like it, although they clearly haven't fired the lettering guy from the last poster that ended up being a disaster. Could that text at the top possibly be real?

Tons of pictures from a recent "Night of the Creeps" reunion, being filmed for the upcoming DVD. Check the Flickr set at the link.

Wes Craven says he's not quite finished shooting "25/8" yet, as they may go back for some reshoots in July. Then he's hoping to have everything finished for a possible late '09/early 2010 release.

Megan Fox talks about "Jennifer's Body", including the fact that she was not able to deviate from Diablo Cody's script one single word, because Diablo Cody fancies herself the greatest screenwriter in the world.

Paul Schrader pens remake to "Tomie", the Japanese horror series with 7 sequels. I've heard of these films but have never seen any, can one of our readers fill us in in the comments?

Kevin Williamson whines like a 14 year old on his Twitter that Neve Campbell won't do "Scream 4". Wow... hang your head in shame, man.

A lot of speculation going on about this "Halloween 2" image. Speculate no more, we'll see it for about 2 seconds in the film... mark my words. 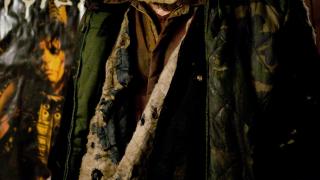 Behind The Scenes Of "Halloween 2"