I've never hidden that fact that I want to make a sweet sweet baby with the original "The Amityville Horror" and now I'm giddy with delight over the green lighting of "The Amityville Horror: The Lost Tapes". The movie, which is set for a 2012 release, will focus on a journalist trying to uncover the true story behind the house after the events of the first film. Will it be awful? Mostly likely but F you, I want to see some bleeding walls!

Universal has decided to push the start date of Ron Howard's adaptation of Stephen King's "The Dark Tower" after rumors were flying around that they might pass on the 3 movie series all together. Why would they do this? I don't know, I'm not allowed in these meetings. Have you seen my wardrobe? They're not going to let a jackass in dirty jeans and a "Don't Mess With Texas" t-shirt into a big fancy executive meeting.

I'm a cynical asshole, by nature, and because of that it pains me more than anything else in the world to admit the trailer for the "Fright Night" remake actually looks really really good. And I'm not even saying that because Colin Farrell is a dreamy SOB. On a side note. When the hell did we find out this movie was going to be in 3D? I could have sworn two weeks ago we found out the cast. Now it's releasing in August? Where the hell have I been?!

Danielle Harris has become the go to gal for horror movies that aren't going to be released in theaters so here's the trailer for "Shiver", a horror movie she stars in that I'm 99% sure is only going to play in 17 theaters across the country. What the hell do I know though, it's got the guy from "Starship Troopers". Anyway the film focuses on a secretary who fights back after being assaulted by a serial killer. Rae Dawn Chong is in it too... take that however you want.

The first trailer for Lars Von Trier's new end of the world flick "Melancholia" has hit the tubes and much to my surprise it looks fairly un-hammer-to-the-penis-like. Yes that women who took a hammer to William Defeo's penis in "Antrichrist" is in this movie, so you keep thinking about it, but there's nothing to lead me to believe that's going to happen again. God I hope that doesn't happen again.

Speaking of Willem Dafoe and his lumbering manbits, they'll both be in the upcoming big screen adaptation of Dean Kootz's "Odd Thomas". The story focuses on a cook who's able to speak to the dead. Defoe plays a police chief who knows the young lad's secret. I have no clue if Defoe's member will be playing a different role.

It looks as if Rob Hall's "Fear Clinic" mini-series will be making it's way to the big screen, and Danielle Harris and Robert Englund are both on board for the magic. For those of you who aren't familiar with the series or Rob Hall's spiky hair, it follows a group of patients who come to a clinic in order to cure the phobias that run their lives. Much like the god awful fear I have of Willem Dafoe's privates. Let's keep this going!

Jessica Biel his apparently been offered a role in the upcoming "Total Recall" remake. No confirmation on which role she's been offered but chances are it's one of the two leads. She doesn't seem like the kind of girl who would be into playing that big women who has an exploding head or the three boobed hooker. Then again what do I know, I'm still focused on Willem Dafoe's flim flam. Happy Monday folks!

If you plan on giving up watching Syfy movies for the New Year you might want to check out the new clips from "Mega Python vs. Gatoroid" first. I'm going to go out on a limb and say this is going to be the greatest movie they've ever made. That's a tall order I know but it does have Debbie Gibson and Tiffany.

Danielle Harris is back my friends with "Shiver" and I am just tickled pink. The movie is about a secretary who's being stalked by a serial killer who has to fight for her life. I hope it has singing, that Harris has got a heart of gold that I know it's just waiting to get out. I don't even think I'm being sarcastic.

It's what the kids call a "slow day" around here at the BGH newsroom so here's a trailer for "Devil in Baby Joan" which is pretty much a "The Last Exorcism" knock off but it doesn't look awful. At the very least it's got some really nice looking title animations. So that's something, huh?

And because one of you did something very very wrong this year and we all need to be punished here's the On Demand trailer for "Hatchet 2". It's a trailer for the movie to let us all know that it's going to be On Demand. I probably didn't need to explain that though. 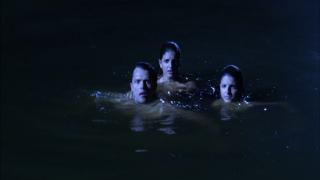 The Black Waters of Echo's Pond

"Zombieland" takes in a whopping $25 Million this weekend, placing the film firmly in the #1 spot for the box office! If Woody Harrelson isn't enough to draw you in, be sure to check out Mark's review if you've yet to see the film for yourself!

"Paranormal Activity" continues to make money and draw in fans. If the midnight releases are too late for you, the studio plans a full limited release this Friday October 9th! It will be playing in the same theaters as before, but now the film will be showing at all hours! "Paranormal Activity" took in roughly $525,000 this weekend on limited screens.

MTV announces that "My Super Psycho Sweet 16" will premiere this month on MTV. Sure, it's not music videos, but at least we get to see some annoying teens get muderlated as opposed to watching them try to date in awkward situations for a change! Watch for it October 23rd at 10pm Eastern.

Casting news continues to trickle out for the new 'American Anime' NOTLD remake, "Night of the Living Dead: Origins". Joining Danielle Harris in the titular role of Barbara will be Mos Def as Ben.

Rumors are starting to circulate that the next outing for Jason Vorhees in remake land will be shot in 3-D. However, Platinum Dunes Brad Fuller says the film has yet to be greenlit since there is no script as of now. One can only hope that a 3-D Friday the 13th might be less mediocre than the remake.